Haunted Houses – Are You Afraid of Them? 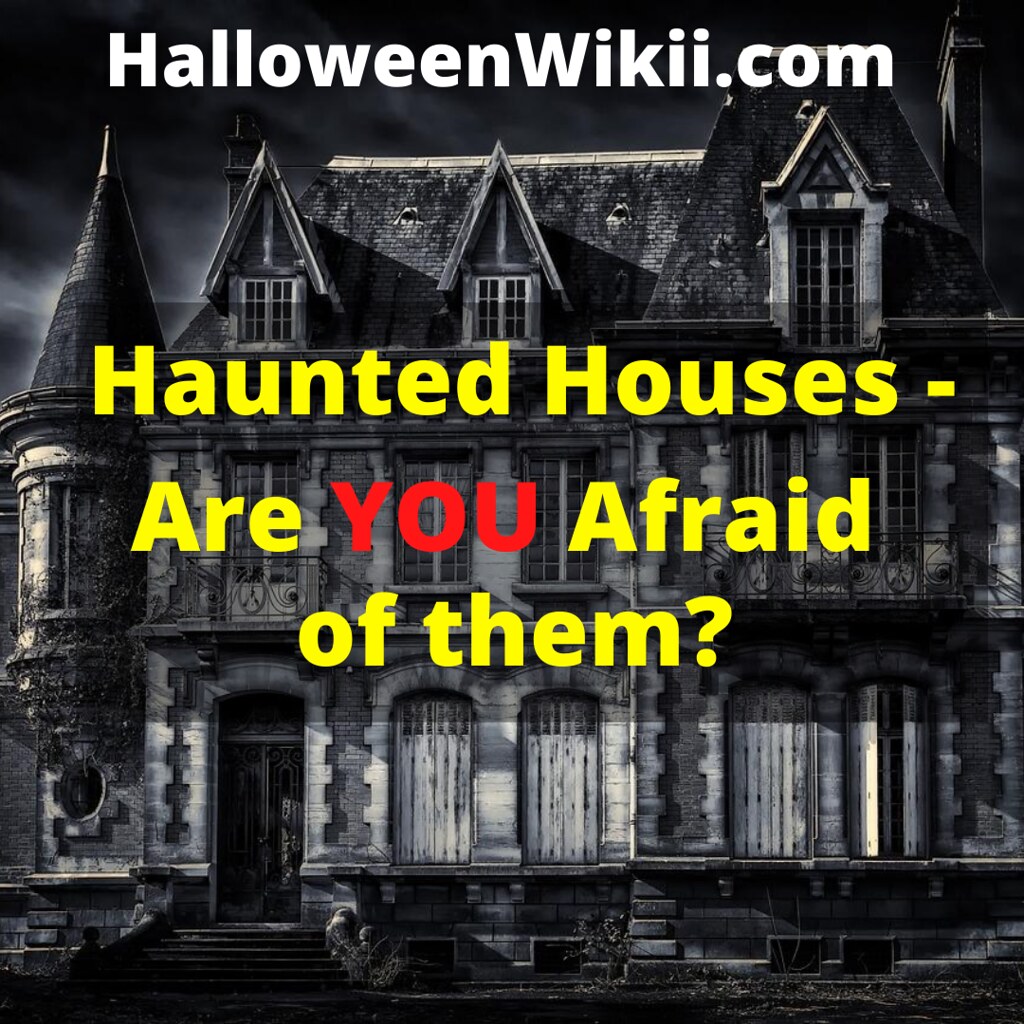 It’s that time of year again. Time for all the ghouls and demons to come out of the woodwork. Time for children to dress up in imaginative costumes and go around their neighbourhoods asking for treats. Yes, it’s that enjoyable annual holiday: Halloween.

During this holiday, one popular tradition, for many, is to go to the local haunted houses. In these creepy homes, people delight in the chance to entertain their primal fears. Many of us get a kick out of a good scare.

Here the rules change. This time the scares are real, and the safety of the victim is placed into question. Now one comes face to face with the supernatural. That is, assuming that there is such a thing as the supernatural.

Most neighbourhoods in many parts of the industrial and post-industrial world, seem to harbour one, or two allegedly haunted places. According to Dennis William Hauckís National Directory of Haunted Houses, there are over 2,000 haunted places in the United States alone. This shouldn’t come as too much of a surprise considering that the only real criteria for a haunted house is a creepy atmosphere, a fairly rich history, and a few eyewitness accounts.

So, where are some of the best places to go, to see a ìrealî haunting? How about two of the most haunted places on earth?:

Whaley House – Located in San Diego, California, this is the current reigning champion for the nation’s most haunted house. The abode was partially built on an old cemetery, as well as some of San Diegoís first public gallows. The residence has stood there for the past 148 years. Placement of the house, has made it a prime scene for many gruesome acts over the past century. Because of this, vast arrays of ghostly sightings have occurred on this property. These include the ghost of a young girl who accidentally hung herself on a clothesline whilst running down a hillside. Noted thief Jim Robinson, was hung 5 years before the house was built. His place of death now resides between the parlor and music room. Visitors have reported feeling a coldness and constriction of the neck, when around the archway that separates these rooms. Along with these two ghosts, there are numerous accounts of phantom scents in some rooms, cries of nonexistent babies in other rooms, and various apparitions that have been seen in the house’s mirrors and windows.
Shop Haunted House Home Decor
Haunted House Lighting
Haunted House Lanterns
Haunted House Stained Glass Suncatchers
Haunted House Outdoor Inflatables
Borley Rectory – Not to be outdone by the States, England is also host to a number of haunted places. The most haunted of which is, allegedly, Borley Rectory, in the small town of Borley, in Essex. The rectory (lodging for priests) was built in 1863, on the site of an ancient monastery. Interestingly enough, it was built on a spot that was already known to house a ghost (a nun who was bricked up alive, in one of the monastic cellars). The rectory has since had numerous sightings of the nun, as well as many poltergeist activities, where various objects would be smashed, or displaced. Strange sounds, odors and cold spots are all known to occur there as well.

While both of these places claim to be haunted, one must ask if haunting is even a real thing, or just a psychosomatic phenomenon. Are ghosts real, or just figments of our imagination? This remains a controversial topic among the general public. A recent Harris poll (February 2003) found that a whopping 51% of people surveyed, believed in ghosts.

Of course belief in something, and the reality of it, are not always one and the same. After all, there was a time when much of the world believed that the planet was flat, and that disease was caused by the influence of the stars. While there is much debate over the validity of ghosts among the general public, there is little to no debate among the scientific community. To date, there has been no concrete evidence to suggest the validity of ghosts, or any other preternatural occurrences.

Okay then, so what are people seeing? Along with the various ghost seekers out there; there are also a handful of ghost-busters. Reading the various reports from these guys, has shown that ghostly encounters are the result of one of two things.

The first term is just reserved for clinically insane, right? Not really. Hallucinations are more common among the general public, than one might think. A hallucination is simply a moment where oneís brain mistakes a sight, sound, or smell, for something it isnít. Most hallucinations occur during ìdazedî moments. That is, moments when the person is in a fairly relaxed state. The two most popular times are just when one is going to, or coming out of sleep, or when doing a relaxed, fairly monotonous activity.

Hallucinations that occur when one is about to go to sleep, or when one has just come out of sleep, are called Hypnopompic Hallucinations, or ìwaking dreams.î The brain is not fully out of ìsleep modeî when one wakes up, and thus, moments of dreaming, leak out into reality. Hallucinations can also occur during monotonous activities like cleaning. When one is placed into a daydreaming type state, apparitions have a tendency to occur. Many people report seeing something out of the corner of their eyes. This is often the result of their eye registering the sudden movement of some small thing (e.g. a fly, their eyelash, or pieces of drifting material inside the eye itself), and their brain associating it with a larger thing. Sometimes these take on the form of a person standing, or sitting. The degree of the detail in the hallucination, has a lot to do with how susceptible/imaginative the hallucinator is. The result, though, is always the same. The second the person looks away, the ìapparitionî disappears.

As for why so many people report the same thing; this has a lot to do with the power of suggestion. People who are aware of the stories associated with a particular place, are often predisposed to seeing the objects in question. Most of the time, the hallucination is just attributed to some portion of the stories the person may have heard (often getting molded to fit the scenario after the fact). Other times, the hallucination is vivid enough to create a new ghostly tale. This is usually the result of a person with a ìfantasy proneî personality type. That is, a person who is particularly good at fantasizing. Many people like this go on to write fantasy/science fiction books, or claim to have psychic abilities. They also tend to be easily hypnotized. Cases where objects are found displaced, or moving, are often exaggerations of what actually happened. Sometimes the person might even subconsciously move stuff about in an effort to bring their fantasy to life.

Which, then, leads us into our second major type of haunting: hoaxes. Many haunted places around the globe, are staged that way to elicit the feeling of paranormal activities. Many places that have a history of being haunted, are probably getting a helping hand from owners/staff members who are trying to keep the legends alive. This can be small things like synchronized stepping sounds during a certain portion of the night, to intentionally flicking light switches on and off, creating ghostly images, and making up secondary stories.

Oftentimes, these “hoax houses” are readily ferreted out. Occasionally though, a haunted house retains its air of paranormal for much longer, and resists attempts at debunking. Take, for instance, the infamous case of the Amityville Horror. The Amityville Horror took place in Amityville, New York in 1975. The home had been the scene of the gruesome murder of the DeFeo family by family member Ronald Butch Jr. a year prior. The home was bought by George and Kathy Lutz, and their three kids. Not long after moving in, the Lutzes reported the demonic possession of their house, and gave a somewhat detailed account of what occurred there during their 28 day stay.

The story was turned into a book by authour Jay Anson, in 1977. This was then followed by a 1979 movie based on the book, and now a 2005 remake. All three feature the tagline: a true story. This, though, was far from the case. Ever since the initial tale was brought to the publicís attention, there have been detractors. Yet despite the noted compilation, by researchers Rick Moran & Peter Jordan, of over 100 different factual errors seen between the bookís story, and the actual facts (e.g. the supposed demonic hoof print found in the snow, could not have occurred as there was no snowfall that night), despite these facts, the legend continued.

In the end, it finally took the confession of William Weber (the DeFeoís attorney), and the Lutzes themselves, to finally put this legend to rest. The Amityville Horror was finally debunked, but the damage was already done. All successive owners of the DeFeoís old estate must now deal with multitudes of gawkers and paranormal investigators, who insist on touring the ill fated home.

So this Halloween, if someone dares you to spend the night at the local real haunted house; just remember the famous words of investigative authours Robert Baker and Joe Nickell: